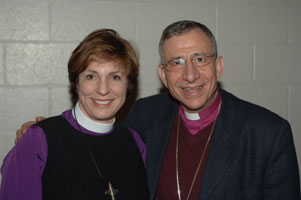 The Rev. Munib A. Younan, bishop of the Evangelical Lutheran Church in Jordan and the Holy Land, Jerusalem, is in the United States this month for a series of speaking engagements at Lutheran institutions and at the Global Mission Festival this week in Winter Park, Fla. Younan spoke Jan. 18 at Muhlenberg College, Allentown, Pa., met with students and faculty Jan. 19 at the Lutheran Theological Seminary at Philadelphia (LTSP), and preached Jan. 20 and 21 at Trinity Lutheran Church, Lansdale, Pa. (Here Bishop Younan is pictured with ELCA Southeastern Pennsylvania Bishop Claire Burkat. Picture by Rev. Eric Shafer)

Muhlenberg College is one of 28 colleges and universities of the Evangelical Lutheran Church in America (ELCA); LTSP is one of eight ELCA seminaries; Trinity Lutheran Church is an ELCA congregation. The remainder of Younan’s schedule includes several public appearances:

A week before he left for the United States, Younan and 12 other Middle East Christian church leaders issued in a Jan. 7 statement to express deep concern about deteriorating relations between Fatah and Hamas leaders in the Palestianian Authority. In their statement, the church leaders said they “feel the time has come to call for intense prayer to Almighty God for peace and an opportunity for calm.”

“It would appear that all kinds of mediation and attempts at reconciliation have so far failed resulting in a deadlock in the situation,” the church leaders wrote. “The latest allegation and threats which have been aired through the local and international media have resulted in some large-scale fighting which will soon be very difficult to stop. Added to this, the threatening language … by representatives of both movements and other related parties are both unprecedented and very aggressive. Such occurrences can only bring a civil war nearer by the hour. The outcome would be so drastic that it will obscure the real priorities of the whole Palestinian issue.”

The church leaders urged people to pray for their neighbors rather than “hurling accusations at each other.” Fighting with and kidnapping opponents will not bring down the Israeli Security Wall that surrounds and, in some places, cuts through Palestinian land, nor will it end an embargo on the Palestinian people, the leaders wrote. “We believe we have an obligation to change course especially for the sake of all of our children and young people who deserve a better future devoid of hatred and bitterness,” the church leaders wrote. They called for an “all out effort” to unite Palestinians and concentrate on interdependence and the opportunity for peace and security for all people living in the Middle East, including Christians, Jews and Muslims. The Christian church leaders offered themselves as mediators “or in whatever role deemed necessary and helpful by our people,” their letter concluded. Bishop Munib Younan spdeparted Wednesday for a 10-day trip to the United States to visit partner churches, organizations and others involved in interfaith dialogue. His public speaking schedule follows, call ELCA offices in Chicago (1-800-638-3522 talk to Christoph Schneider-Yattara, Joe Clairmont or Rev. Said Ailabouni)