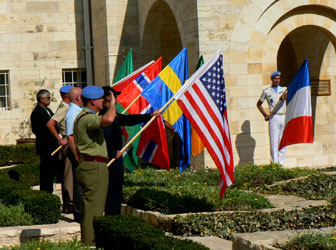 Bishop Munib Younan of the ELCJHL was invited to preside over the religious commemoration of the United Nations Truce Supervision Organization Ceremony that honored the 32 UN peacekeepers who have given their lives since the organization was formed in 1948. Ambassadors from the 14 countries who lost people were asked to lay a wreath for their honored dead. Four of the dead were the UN observers killed this summer by Israeli shells. Six people were given awards for having served 25 years with the UN, and others were given other service awards.