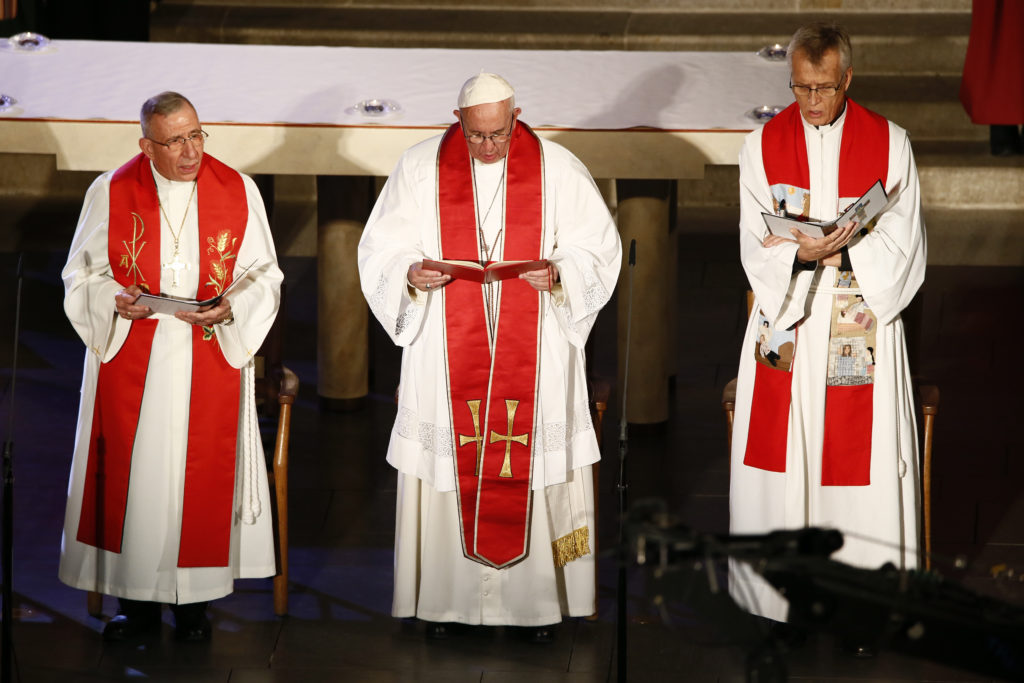 Jerusalem, 10 November 2016 –  In a historical world event the Head of the Catholic Church, Pope Francis, the President of the Lutheran World Federation, Bishop Munib Younan and LWF General Secretary The Rev. Martin Junge met in Lund, co-hosted by Sweden to commemorate the 500th anniversary of the Reformation.
With 31 October 2016 marking the 499th year of reformation, Pope Francis, Bishop Younan and Rev. Junge met for a joint-commemoration of the reformation in Sweden, the result of 50 years of dialogue to promote Catholic and Lutheran unity.
Lutheran World Federation leaders and the Pontifical Council for Promoting Christian Unity, created a document “From Conflict to Communion” as a framework for reconciliation between the two churches.
The document addressed theological topics that would lead the churches beyond differences and focus on the commonalities, which the document deemed to be unity, The Holy Sacrament of Baptism and Five Ecumenical Imperatives.
This year the three church leaders took yet another step toward the goal of unity, thanksgiving and repentance when Bishop Younan and Pope Francis signed a Joint Statement in the Lund Cathedral (found below in links) agreeing to remain “rooted in Christ and witnessing to him, renewing our determination to be faithful heralds of God’s boundless love for all humanity.” (Joint Statement, 4)
Later during the ecumenical event, LWF World Service Director Ms. Maria Immonen and Caritas Internationalis General Secretary Mr. Michel Roy, signed a Declaration of Intent between the two organizations to work jointly on issues of justice, peace and reconciliation.
Bishop Younan discusses the significance of this historical event

I was honored to be there with the Pope and the General Secretary and to jointly lead the worship service in Lund and the gathering in Malmö Arena.
The significance of this historical reconciliation between Catholic and Lutherans that happened in Lund and Malmö will be seen in the future as being about trust and friendships. Today when we speak on ecumenical relations, we will not only concentrate on the academic theological dialogue between the two churches, but we will also speak about friendships, and trust.
For me these relationships of trust are the values that will help us proceed, to move forward in our dialogue. Both the Lutheran World Federation and the Vatican have built a level of trust and friendship that can help us to go forward in our common work to a broken world. This is the main significance of the commemoration.
Secondly, I felt that in both the Lund Cathedral and in the Malmö Arena that the Holy Spirit was at work. We all know that the Holy Spirit works in her own way and sometimes it is illogical, but it was working in Lund and in Malmö, and she guided us to ask, “What will be the next step?” That was the consensus of all of the ecumenical guests.
Guests in Malmö and Lund, sensed the depth of ecumenism in the Cathedral. It was a common worship that had deep spirituality. It was not a show, but a worship where we thanked the Lord for the faithfulness of the Gospel in both churches, where we repented for the divisions of the past and we said together that “the past should not determine our future,” it is where we committed ourselves to work together. Even if there are still some theological differences we are convinced that we are called to work for unity but not necessarily uniformity. For what unites us in grounded in Christ, not in divisions.
In the Arena, we translated the worship in the Cathedral to mean we must go forward toward the world’s great issues. We went from the mount of Transfiguration in the Lund Cathedral into the valley in the Malmö Arena where we saw that Jesus is the way forward in issues of injustice and poverty in our world. We committed to work together with passion for the church and compassion to the world.
For this reason, we committed to heal the world together with Christ’s help. Today we have heard the call of Christ that the church has to defeat injustice, and to care for refugees and to embrace them, and to combat poverty, contagious diseases and climate change.
The world’s problems are not Lutherans or Catholics or any other religion; they are problems of humanity and it is Jesus Christ who has come to the world, through the cross, to save humanity.
And as followers of Christ, all churches are sent into the world to carry the cross and to assist in the alleviation of pain and suffering caused by sin.
This will have its own ripples for a long time in the ecumenical movement because our relations are built on trust and friendships that are supported by theological dialogue.
May the Lord Jesus continue to lead us with His Holy Spirit

More Joint Ecumenical Commemoration “Together in Hope” videos can be found on the ELCJHL Video Gallery.

Further information on the Joint Ecumenical Commemoration will be made available on the website lund2016.net. 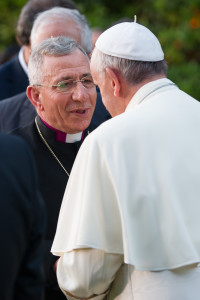 LWF President Bishop Munib A. Younanin conversation with Pope Francis after the prayer for peace in the Middle East at the Vatican. Photo: Osservatore Romano

GENEVA, 6 September 2016 (LWI) – On 31 October Pope Francis, LWF President Bishop Dr Munib A. Younan and LWF General Secretary Rev. Dr Martin Junge will lead the Joint Ecumenical Commemoration in Lund Cathedral and Malmö Arena. The arena in Malmö can host up to 10,000 people and tickets for that event will be released on Friday 9 September.

The joint Ecumenical commemoration will consist of two parts, a Common Prayer in Lund Cathedral and an event in the Malmö Arena that is open to wide participation. Pope Francis, LWF President Bishop Dr Munib A. Younan and LWF General Secretary Rev. Dr Martin Junge will lead the Common Prayer and the event in Malmö in cooperation with leaders from Church of Sweden and the Catholic Diocese of Stockholm.

A number of artists, choirs and guests will participate and perform during the event in Malmö Arena which begins at 13:20 and ends at 18:00. The Arena will open at 12:30. The Common Prayer in Lund Cathedral will be live-streamed to Malmö Arena and the audience in the Arena will be able to follow and participate. They will then be joined by Pope Francis, President Younan and General Secretary Junge in the Arena under the theme “From Conflict to Communion – Together in Hope.”

The event in Malmö Arena will be a stage for activities focusing on the commitment to common witness and service of Catholics and Lutherans in a world, wounded and broken by conflict. Highlights of the joint work of LWF World Service and Caritas Internationalis will be featured, including care for refugees, peace building, and advocacy for climate justice.

Further information on the Joint Ecumenical Commemoration will be made available on the website lund2016.net.