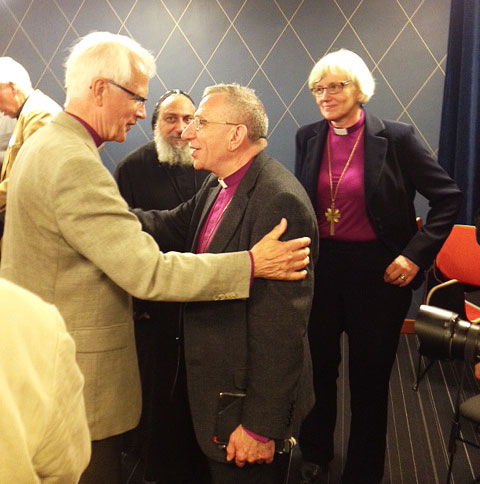 Recently, a representative of the World Council of Churches (WCC), the Swedish crown princess, Bishop Munib Younan, church leaders and thousands of others took part in the celebration of one thousand years of Christianity in Sweden held in the Diocese of Skara in southern Sweden.

The diocese, which is one of the oldest existing dioceses in Sweden, was once a diocese of the Roman Catholic Church. Since the Protestant reformation it has been part of the Church of Sweden, which is Lutheran.

The weeklong celebration included a pilgrimage of young people from five countries who walked seven days together, worship services with strong ecumenical representation from different countries, concerts, workshops and seminars. More than 12,000 participants took part in the celebrations.

During the official lunch held on Saturday, in which Crown Princess Victoria participated, Rev. Dr Hielke Wolters, WCC associate general secretary, expressed appreciation for the ecumenical attitude of the Church of Sweden:

“I was touched to see so many representatives of churches from different parts of the world. While celebrating 1000 years of Christianity in your country, you have included the concerns of churches in the Middle East that are much older and are under pressure right now,” Wolters said. “And you are willing to learn from African churches that are much younger. That is a strong sign of ecumenical solidarity and openness to ecumenical learning.”

One concrete example of ecumenical cooperation during the celebrations was a pilgrimage called “Walking to Emmaus”. It involved 45 youth between 17 and 22 years of age from Sweden, South Africa, Germany, England, and Palestine. They walked together for seven days and shared experiences of faith and life as well as a sense of the worldwide church.

The purpose of the project is to make it possible for 60 young people to take part in pilgrimages in Sweden during 2014 and in Israel and Palestine in 2015 to gain a common understanding of each other, different traditions and the worldwide church.

Participants in the closing worship included church leaders from Sweden, Finland, UK, Germany, the Middle East, as well as Archbishop emeritus Anders Wejryd of the Church of Sweden, the WCC president for Europe.

To read this article on the World Council of Churches (WCC) webpage, you can visit here.