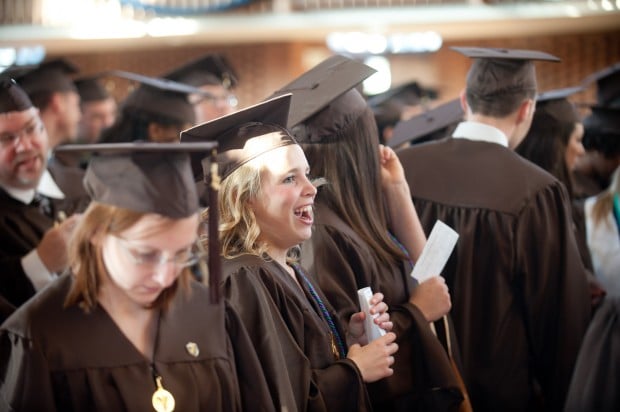 VALPARAISO, 11 December 2011 – The December 2011 graduates of Valparaiso University will undergo many changes in their lives, but their values will help sustain them, an Evangelical Lutheran bishop said Sunday.

“These values will determine who you are and, ultimately, the contributions you leave behind in this world,” Munib Younan said. “Values will carry you through the peaks and valleys.”

Younan, bishop of the Evangelical Lutheran Church in Jordan and the Holy Land, and president of the Lutheran World Federation, was keynote speaker at a ceremony in VU’s Chapel of the Resurrection where more than 220 students received undergraduate, graduate and law degrees.

Younan was educated in Palestine and Finland and is the author of “Witnessing for Peace: In Jerusalem and in the World,” in which he describes his theology of nonviolence, justice, inclusion and forgiveness. He is an advocate for dialogue, peace and justice in Palestine and Israel.

Younan said while graduates’ interests, jobs and personal lives will change, the values they learned at VU and through their religions will endure.

“Deep down, there will be a part of you that will always be the same,” he said.

Younan said his son, Andrew, graduated from VU in 2005 with a degree in computer engineering. He read books on Plato, Augustine, Caesar, Martin Luther and Martin Luther King, Jr.

“These were individuals who built their lives on enduring values,” Younan said. “Some gave their lives for the values they upheld.”

Values also are what connect Christians and Muslims, with those religions’ shared emphasis on love of God and love of neighbor, he said.

Religion can be hijacked and misused, however, and the crisis of the modern world is accepting others, he said.

“We pray that the work of extremist politics or religions will not succeed.”

People in the Middle East share the same hopes as VU graduates, and are struggling for the same common values of modern democracy, freedom of religion and speech, he said.

Younan quoted Rudyard Kipling’s “The Ballad of East and West,” in which Kipling says “East is East and West is West and never the twain shall meet.”

“Our global village has changed all that,” he said. “Technology and travel have made all the difference.”