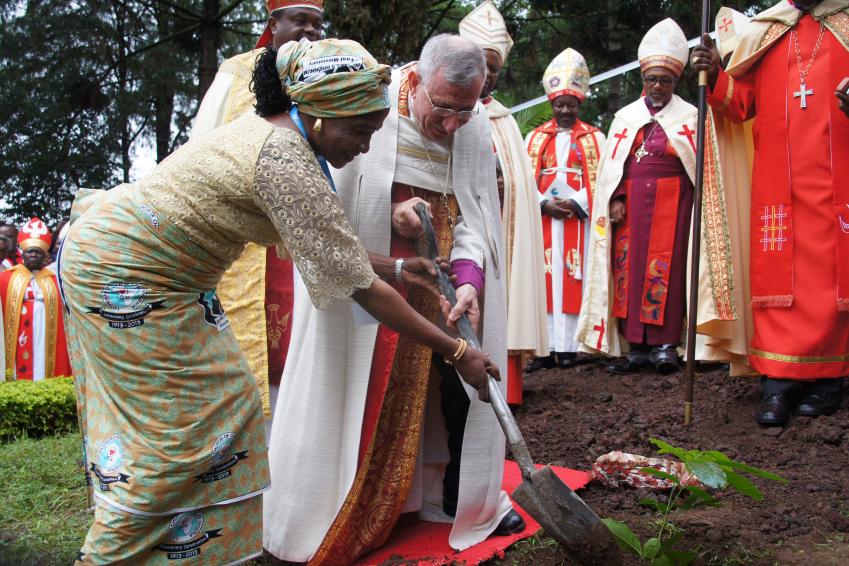 MOSHI, Tanzania/GENEVA, 24 May 2015 (LWI) – African church representatives meeting in Moshi, Tanzania, expressed appreciation for the critical role of The Lutheran World Federation (LWF) in nurturing unity and strengthening solidarity among the communion’s members.

“We have hope. We are ready to go forward,” said Malagasy theologian Dr Mariette Razivello. She was responding to the message of LWF President Bishop Dr Munib A. Younan to participants in the conference to mark the 60th anniversary of the Lutheran communion in Africa.

Razivello recalled that she was just six years old when delegates from the Malagasy Lutheran Church travelled to Marangu in then Tanganyika to attend the first gathering of all-Africa Lutherans in November 1955, envisioning a Lutheran communion on the continent. “You have rekindled our hope for the future, and encouraged us to draw closer to one another and to God,” she said.

In his message, the president thanked the African member churches for their contribution to the LWF, a communion in which all churches are interdependent. He encouraged them to “together reaffirm our confidence in our global communion, seeing it as a vital means for us to participate fully in God’s holistic mission.”

Younan noted that the series of church leadership conferences that grew out of the first Marangu gathering have strengthened the global commitment of unity in the LWF expressed since 1984 in pulpit and altar fellowship. “We learned from Marangu that without communion, we can have a tendency to be become individualistic. With the communion, we each grow in faith, independence, and inter-dependence.”

The Evangelical Lutheran Church in Tanzania (ELCT) hosted the 20-24 May conference attended by over 200 participants including heads of the 31 LWF member churches in Africa, women and youth leaders, and representatives of theological networks and institutions. Global Lutheran leaders and mission partners also took part.

Younan, bishop of the Evangelical Lutheran Church in Jordan and the Holy Land (ELCJHL) paid tribute to prophetic Lutheran church leaders such as former LWF president Bishop Josiah Kibira of Bukoba, who advocated an indigenous African Lutheran church, relevant to the contexts in which people live.

Comparing the challenges in pre-independence Africa to today’s, the ELCJHL bishop reminded churches that God’s grace has liberated them from the bondage of colonization and domination to work together with other Christian churches to realize an abundant life for all people. Churches’ prophetic diakonia must seek to “transform hatred into love, violations of human rights into respect for all rights, poverty into equal opportunity, and injustice for women into gender justice,” he said.

In his response to Younan’s message, Bishop Dr Jensen Seyenkulo recounted how the Lutheran Church in Liberia experienced the global Lutheran communion solidarity during the Ebola crisis last year. “Many times we wondered why us, had God abandoned us for something we did? And then we learned that in this communion we are not alone,” he said.

He recalled a message from the Lutheran Church of Senegal, saying “they were praying for us and had raised some funds. They demonstrated to us that we were not abandoned.” Seyenkulo thanked the many other churches that made contributions, “giving us the energy to fight Ebola,” and Younan for “reminding us that we cannot care for ourselves alone.”

Ms Blessing Shava, Evangelical Lutheran Church in Zimbabwe, expressed gratitude for the LWF president’s reminder that an abundant life for all is possible. She stressed that working together as churches and engaging with other stakeholders was essential in dealing with challenges such as HIV and AIDS, poverty and other economic injustices, trafficking of persons and armed conflict.

“A lot more can be achieved through cooperation, dialogue, mutual assistance and encouragement,” said Shava, a member of the LWF Global Young Reformers Network. She referred to the notion of Ubuntu (humanness) to underline the need for solidarity in tackling issues that “are central to the survival of our communities.”

She encouraged churches to remain prayerful and trust in the power of the Holy Spirit.

Allison Westerhoff, a member of the Africa Lutheran Information and Communication Network (ALCINET) contributed to this article. Westerhoff is the communications officer for the Lutheran Communion in Southern Africa.

To see this article in its original format, you can visit the Lutheran World Federation (LWF) website.