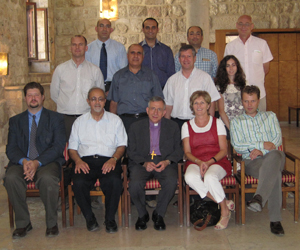 JERUSALEM, 17 September, 2010 – On September 9th, the ACT Alliance – Palestine Forum met with Bishop Younan and formally congratulated him on his election as President of the Lutheran World Federation (LWF).

The group discussed the cooperative work of ACT members in Jerusalem and the Occupied Palestinian Territories. The delegation asked Bishop Younan, in his new role as President of the LWF, to speak out, in particular, on the importance of a shared Jerusalem.  Bishop Younan urged the delegation to encourage their related agencies to cooperate with local churches in their witnessing and programming.

The Lutheran World Federation (LWF) is a founding member of ACT (Action by Churches Together), and welcomed the creation of ACT Alliance, a merger of ACT International and ACT Development in March of 2010. The Evangelical Lutheran Church in Jordan and the Holy Land (ELCJHL) is an active member of the ACT Alliance – Palestine Forum.

ACT Alliance is composed of more than 100 organizations working in long-term development and humanitarian assistance in more than 130 countries. Within Israel and the Occupied Palestinian Territories of Gaza and the West Bank, ACT describes its work as supporting many projects, including health care facilities and vocational training, as well as providing food supplements, medicines, cash for food and cash for work programs, and psychological assistance (ACT Alliance, Occupied Palestinian Territories). For more information about ACT Alliance, its members, and its work, please visit www.actalliance.org.