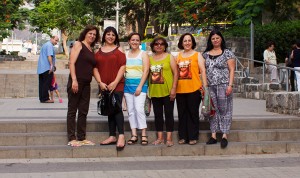 Some of the retreat participants pose for a photo by the Sea of Galilee. (© Danae Hudson/ELCJHL)

Over 90 women from five of the six ELCJHL congregations took place in a retreat on meditation and music therapy over three days in July near the Sea of Galilee in Tiberias.  Organized by Mrs. Bassimah Jaraiseh, Women’s Work Facilitator and led by Suad Younan, the Chairperson of the Women’s Desk of the ELCJHL, the retreat focused on repressed emotions and how to deal honestly with the self and with others.

Mr. Nour Akkawi, a music therapy specialist from the Helen Keller School, and Ms. Salwa Halabi, a clinical psychologist and lecturer at Hebrew University, led discussions on the healing power of music and how meditation helps a person cope with feelings of loss.  A number of women stood and gave testimonies about these memories and feelings, some describing the loss of their homes and families during war. 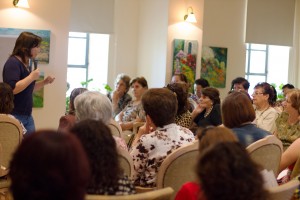 Participants listen to a lecture on repressed memories. (© Danae Hudson/ELCJHL)

Bishop Munib Younan led a discussion on meditation and the Bible, the theology of meditation, and on how to refill their emotions after they had dealt with their feelings of loss in the previous sessions.

On Wednesday, all the participants took part in a service on Mary Magdelene, with five women taking part in a play from the perspective of Mary Magdelene and the bleeding woman from Mark 25.  After the service, the women had their choice of activities, including an hour-long cruise on the lake, shopping, swimming, or just hanging out in the air-conditioning to beat the heat.

To see photos of the retreat, visit the ELCJHL’s online photo gallery.