Gift of Unity in Diversity in Asian Lutheran Communion

KUALA LUMPUR, Malaysia/GENEVA, 15 March (LWI) – Bishop Dr Munib A. Younan, president of The Lutheran World Federation (LWF), appealed to LWF member churches in Asia to continue to be “a vibrant and creative witness” in the world’s most populous region.

Younan, who is bishop of the Evangelical Lutheran Church in Jordan and the Holy Land (ELCJHL), made this call when he addressed church representatives attending the LWF Asia Church Leadership Conference (ACLC) held in the Malaysian capital.

In his keynote address, he pointed out that the 8.8 million Lutherans in Asia comprised many small churches in a region whose population nearly quadrupled during the 20th century. “Even [though] the growth in the churches does not keep up with population growth and LWF member churches make up only about one tenth of one percent of the population, I appeal to you all to be a vibrant witness and a creative witness so that the mission of the church may continue,” said Younan.

The LWF president underlined that increasing secularization and great pressure from the global market “culture” had an impact on identity, cultures and values. Churches in Asia, he noted, were “at a critical moment” when they could be tempted to focus solely on their survival or become reflections of the interests of empire.

“The gift of our communion is that we have diversity in unity. And where better to see that than in this gathering of Lutheran churches in Asia—a communion of churches with a great diversity of languages and cultures, a diversity of gifts that brings us all to a more complete understanding of the Gospel for the 21st century, and for our witness and diakonia,” said Younan. 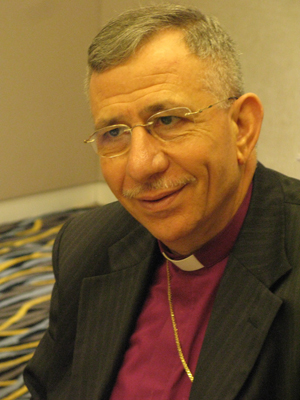 He reminded the LWF gathering of the understanding of mission as the very essence of the church, aimed at “transformation, reconciliation and empowerment, in and of the world.”

Younan called upon the Asian churches to promote greater interfaith dialogue, saying, “It is only through shared humanity that we will build a world that embraces pluralism, equality, democracy, human dignity and respect for other religions and civilizations, even those that are strange to us.”

He reiterated his support for the United Nations’ recognized World Interfaith Harmony Week, an initiative from Jordan, held for the first time this year, 1-7 February, to promote interfaith harmony and good will. “There is no place in the world where Lutherans live on their own. Lutheran churches, rather, live with other religions—sometimes in a minority position, sometimes in a majority position, but never alone,” emphasized the ELJHL bishop.

Younan urged Lutherans to recognize their “oneness in creation, sin and salvation” so they would be able “to act as one communion, where sex, race and class are irrelevant.”

Asians had reason to celebrate the ordination in January of four women in the South Andhra Lutheran Church, the first for the Indian church founded in 1865, he added. “We look at these women as gifts to the proclamation of the gospel, a witness for all people of Asia and a living sign of our vital communion.”

The LWF president emphasized that the Lutheran communion’s reach was felt beyond member churches in Asia. He cited Department for World Service programs, including micro-credit projects in Cambodia, and disaster relief efforts in Myanmar and Sri Lanka, among other countries.

“If our churches are concentrating their discussions and efforts on mission, then remember that the diakonia of the communion is the left hand of every Asian church for it is done on our behalf and for the sake of the poor,” Younan said.

On how the communion was dealing with ethical issues, the LWF president said that according to Lutheran understanding, “ethics is not a list of prescriptions,” but was developed in dialogue, allowing for people to “come to different results.”

He appealed to the churches in Asia to “not shy away” from presenting their views to the global church on issues such as marriage, globalization and stem cell research.

“Do not hesitate and think, ‘We are only a small member church.’ This may be your gift to the whole communion. We must remember that our diversity may mean that we will not always agree on everything.”

The 70 participants in the ACLC included heads of churches, women and youth leaders, and theologians drawn from the 52 LWF member churches in the region. (774 words)