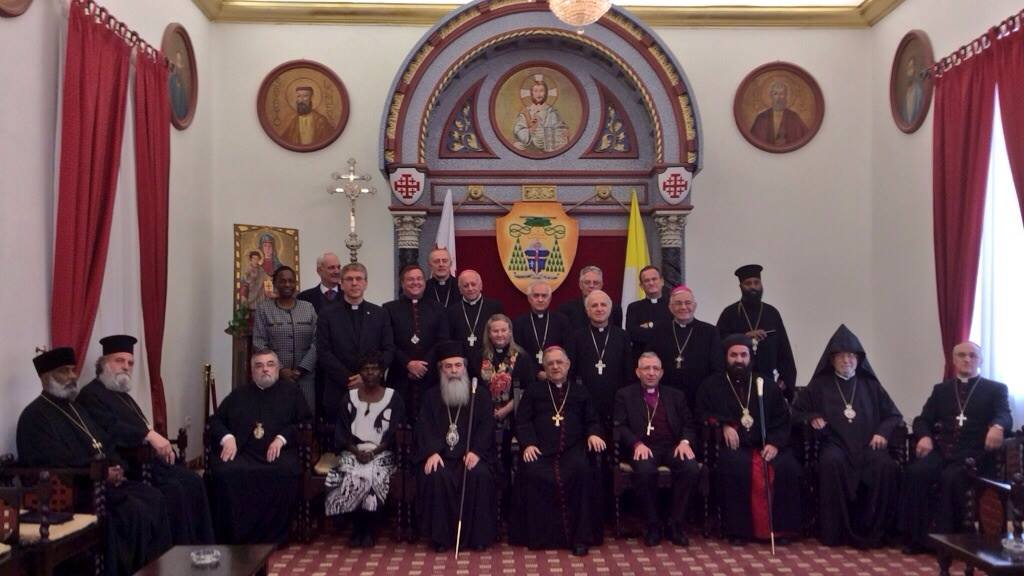 JERUSALEM – Rev. Dr Olav Fykse Tveit, General Secretary of the World Council of Churches (WCC), as well as Dr Agnes Abuom, moderator of the WCC Central Committee, Metropolitan Dr Gennadios of Sassima and Bishop Mary Ann Swenson, vice-moderators of the Central Committee, spent time with the Evangelical Lutheran Church in Jordan and the Holy Land during their pilgrimage to Palestine and Israel on March 7th-12th, 2015.

The delegation held worship at the Evangelical Lutheran Church of the Redeemer in Jerusalem with Propst Wolfgang Schmidt, Representative of the Evangelische Kirche Deutschland (EKD) in Jerusalem and Rev. Carrie Smith, pastor of the English-Speaking Congregation in Jerusalem and Special Assistant to Bishop Munib Younan on Monday, March 9th, 2015.  At the conclusion of worship, the group went together to visit the Haram Esh-Sharif and Al-Aqsa Mosque where they met with the director of the Islamic Waqf in charge of the holy site.

As well as visiting the Al-Aqsa Mosque, the delegation, with Bishop Munib Younan, were invited with the Heads of Churches to an official lunch at the Latin Patriarchate by Patriarch Fuod Twal.

“Our role is to give Christian witness to the world and work for justice and peace,” said WCC general secretary Rev. Dr Olav Fykse Tveit in regards to his visit to the Holy Land.

The Heads of Churches in Jerusalem, including Patriarch Theophilos III of the Greek Orthodox Church, Patriarch Fuod Twal of the Latin Church, and Bishop Munib Younan of the ELCJHL, held a discussion with the WCC delegation on the significance of ecumenism in a time of growing extremism.  In regards to the talk and the visit, Bishop Munib Younan stated, “The more we feel united, the more we can combat any kind of extremism that is existing in the Middle East.”

To read more about the WCC visit, you can visit their website.