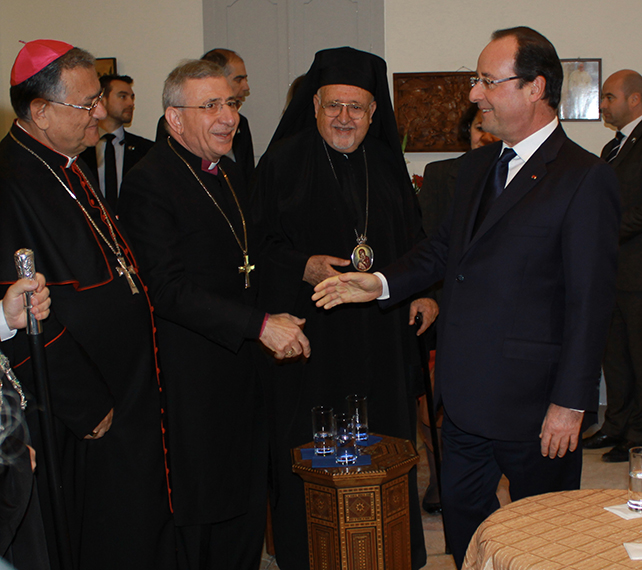 French President, François Hollande, met with Christian leaders in Jerusalem on Monday, November 18th, at St. Ann’s Church in the Old City of Jerusalem to discuss the Christian presence in the Holy Land and the issues surrounding Jerusalem.

President Hollande told the gathered leaders that France has historically been a protector of Catholicism in the Holy Land and will continue to help Catholics and all Christians who live here.  Patriarch Twal asked President Hollande if France could request that funds be earmarked for Christian health and education out of the money that France currently provides to the Palestinian Authority.

Patriarch Theophilos conveyed to the President that the time is now for people and governments around the world to support a Christian presence in Jerusalem so that the legacy and care of Christian holy places could continue, uninterrupted for over 2,000 years.

Bishop Younan addressed the audience about the importance that President Hollande met with Christian leaders in St. Ann’s Church in Jerusalem.  Bishop Younan emphasized the necessity of speaking out for a shared Jerusalem, the importance of interfaith dialogue, including the Council of Religious Institutions of the Holy Land (CRIHL), and interfaith dialogue’s role in building up trust between the three religions and their work in peace education.

CRIHL’s recent study of textbooks in Israel and Palestine found that many textbooks in Israeli and Palestinian schools do not support co-existence of peoples or a shared Jerusalem.  Bishop Younan and the other religious leaders hoped to convey to President Hollande, those gathered, and to leaders around the world that there will be no peace without justice in Jerusalem, a city that is open to all people, that will be without walls and without an army.

To read the textbook study completed by CRIHL, visit their website here.