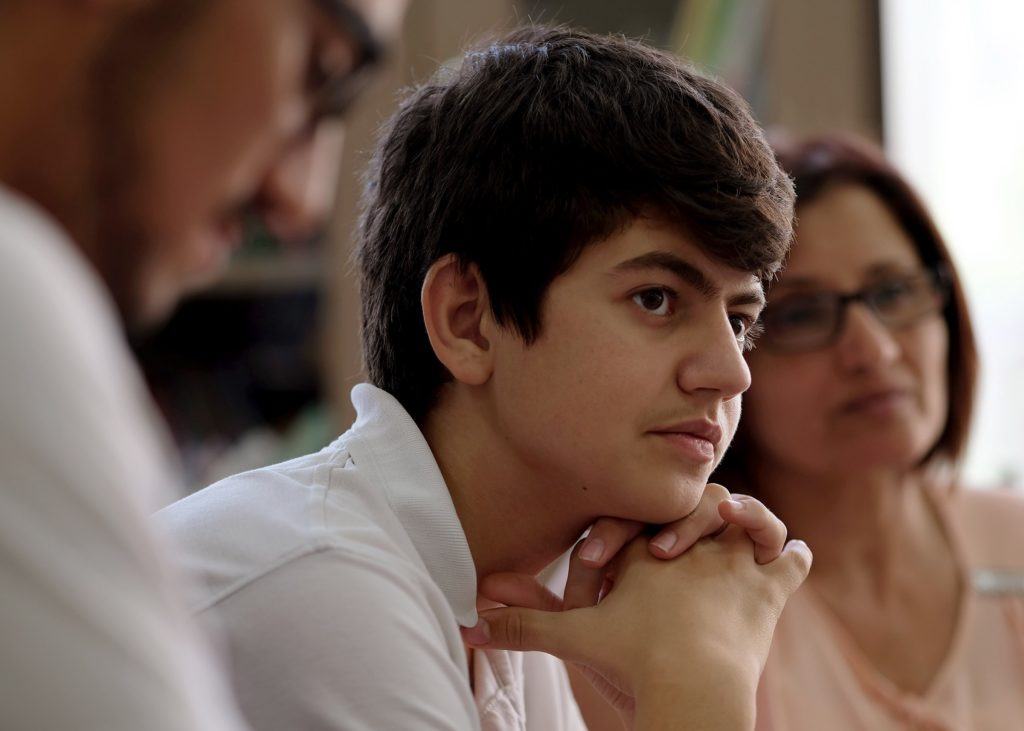 The smiley teen dressed in a stark white, collared shirt embossed with the Lutheran School Talitha Kumi’s emblem, corrects me when I ask him and the director of Lutheran Model United Nations (LuthMUN) why the West Bank school participates in a program designed after the United Nations, an organization that does not fully recognize Palestine.

“Actually, Palestine is a UN member, it is what is called an observer. At this time, Palestine is not a voting member,” he says. (See definitions in box)

“Everything has a good and a bad side, that’s just a thing in life, but when we talk about the UN, we try to go to the positive side and try to solve things, and to look at what has happened by looking at the mistakes.” “We try to solve the mistakes using the positive part of the UN [referring to the organization’s model for peaceful solutions.]”

“The UN was made for maintaining peace and security.”

Said is sharp and confident, yet respectful of the adults in the room. He is also honest and makes no apologizes for what he carefully, and articulately says in fluent English.

“I had nothing to do afterschool, that’s the truth, and I saw that this (MUN) is a really good project which brings you many skills… but more over, it was basically a lot of fun,” he said.

The skills that Said gained from participating in the Model UN program are evident. 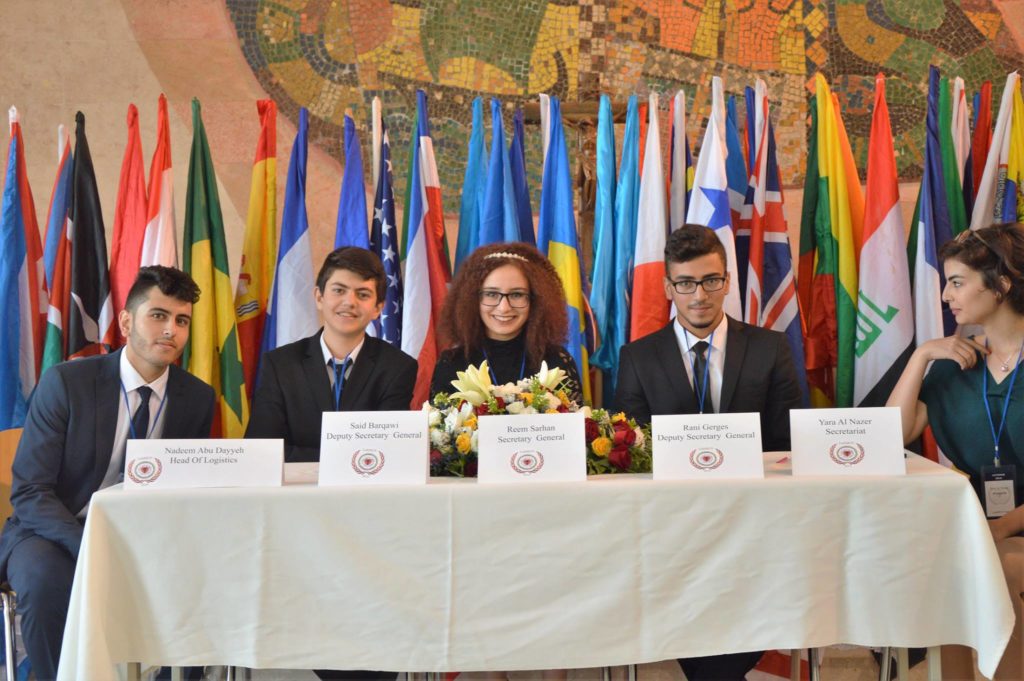 The MUN website says that the program is an “experiential learning process that provides students with better understanding of the inner workings of the UN and helps students gain skills such as diplomacy, negotiation, critical thinking, compromise, public speaking, writing and research.”

Aside from simply having something to do afterschool, these are the tools that students like Said and others from the LuthMUN conference will carry with them and use in communities divided by conflict.

Sana Abu-Amsha, Director of the 2016 LuthMUN conference chimes in, “The students learn not to accept the same resolutions [former UN decisions], but to create better solutions.”

The Model UN program makes finding those better solutions possible for highschools under The Evangelical Lutheran Church in Jordan and the Holy Land’s education umbrella.

The national MUN Palestine (PalMUN) was established in 2010; three years ago the LuthMUN was created by the ELCJHL Director of Education’s Office with only Lutheran schools participating in the first two. This year the ELCJHL Director of Education Office team arranged hosting a national LuthMUN on 8-10 August at Talitha Kumi School with four non-Lutheran schools attending. The Friends Boys School, the Rosary Sisters School, St. George School and the Friar School joined the LuthMun’s first hosted conference.

This year’s LuthMUN had 210 delegates from the participating schools representing six committees. The topics:

Students from Gaza were invited to participate but were denied travel permits by Israel. Students from Nazareth cancelled due to other issues and could not attend, either.

“We send our students to these conferences all over the world to gain the experience of debate and to see the world.”

Bishara proudly adds, “Some of our students have participated in five or six national and international MUN conferences.”

In September, eight students and two teachers from the Evangelical Lutheran School (ELS) of Hope in Ramallah, the Lutheran School of Beit Sahour, and Dar al-Kalima attended Pilsner, Czech Republic, the PDSMUN.

The theme of that conference was terrorism and nuclear disarmament.

Talitha Kumi has its hope on three students attending a conference in Cambridge, England this November.

To prepare for these conferences students must commit to at least 30 hours of training. Each student is assigned a country that is not her own and she will have to study the foreign policy of that country regarding the issue given within the theme.

They have to study 30 days before the conference to prepare arguments.

“They will learn everything about a country,” Bishara said.

Rani, another senior at Talitha Kumi, has served as chairman of committees and most recently, as the delegate for the United States.

His classmate, Said says of Rani, “The delegate of the U.S. is always expected to be good,” “All eyes are on the U.S. delegate. The conference always gives the U.S and Russia to good delegates!”

Rani grins with great dignity. Earlier he added that he joined the program because he wants to share his opinion on politics.

“Becoming a part of LuthMUN changed my character,” he said. 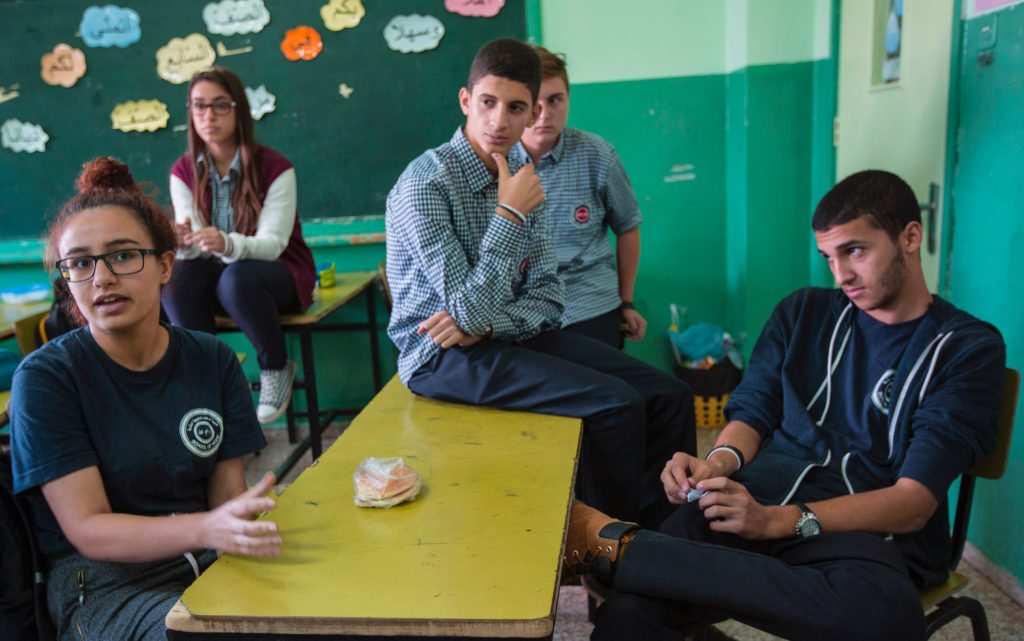 One character changing aspect of the program is that it empowers students to organize, lead, and make decisions.

After five years of involvement, the students have become veterans and conduct student training for new participants.

“Graduates of the school return to help with the training and as advisors,” Bishara touts, “The entire LuthMUN Conference was organized by students.”

Reem, a twelfth-grade student at ELS School of Hope in Ramallah, says that she is thankful for the training because it has given her a chance to discover what she wants to do after high school.

“I would like to practice international law,” she said. “It (LuthMUN) has taught me about solving issues that must be defended.”

The entire experience from start to finish grooms leaders, but it is not free.

The national LuthMUN costs each student 250-350 shekels ($62- $87) and that can be a hardship for some families. Travel costs for international MUN conferences rises significantly.

The trip to Czech Republic was $8,000 for the students and teachers.

ELCJHL Director of Education Office fundraises for up to 85 percent of the expense for ELS in Ramallah, ELS in Beit Sahour, and Dar al-Kalima school students, but even the remaining 15 percent can be a challenge for some parents.

Other donors are the Evangelical Lutheran Church in Northern Germany (Centre for Global Ministries and Ecumenical Relations) and the Finnish Evangelical Lutheran Mission among others. ELCJHL Director of Education, Dr. Charlie Haddad has made proposals for funding throughout the years as well.

For many of the students, Bishara says, “It is their only chance of traveling abroad and having contact with western democratic countries.”

Bishara emphasizes the unique importance of this program for Palestinian schools.