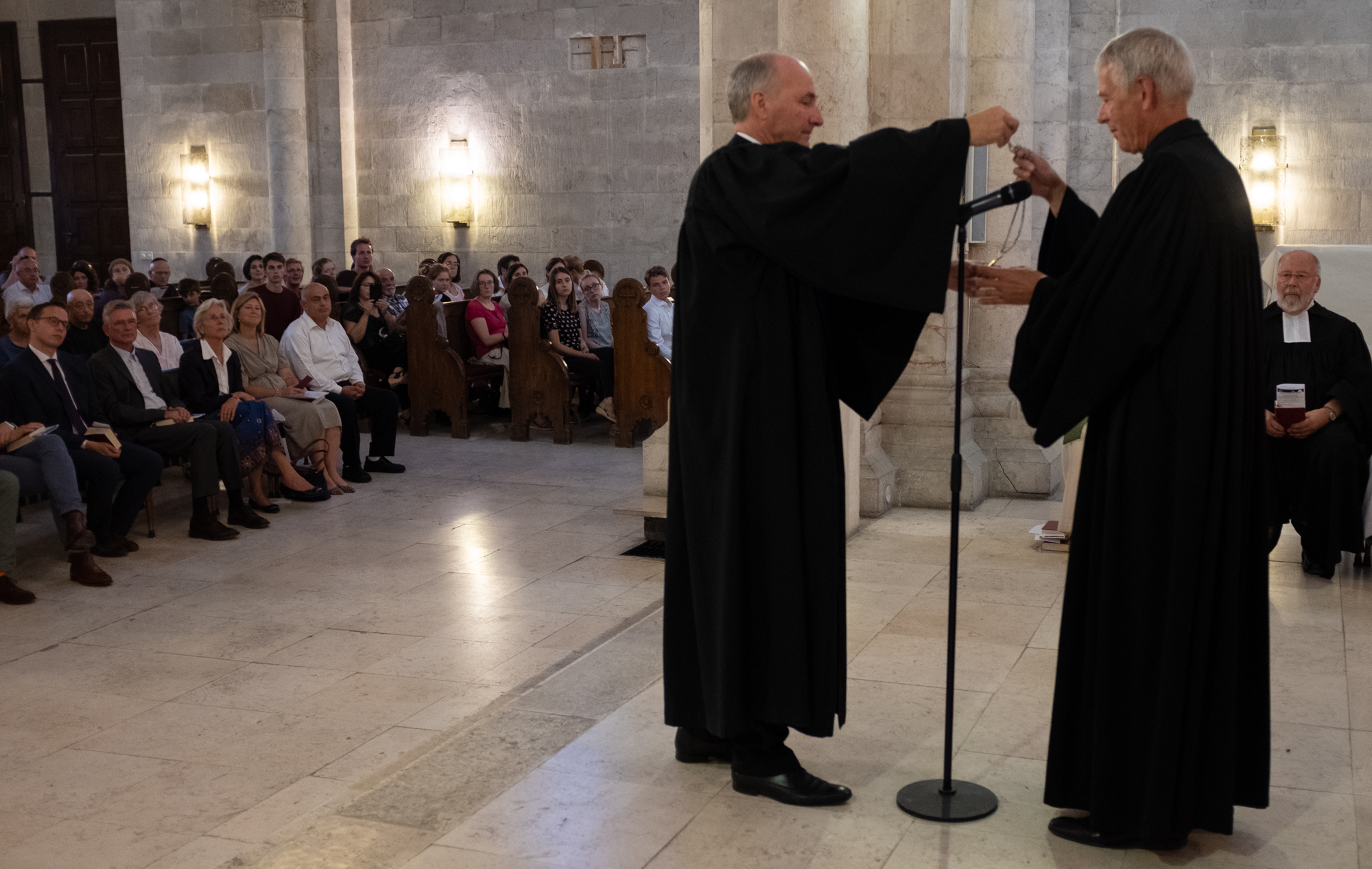 Jerusalem – In a farewell service on Wednesday 4 September 2019, Rev Wolfgang Schmidt and his wife Anette Pflanz Schmidt said good bye to the Evangelical Lutheran Church of the Redeemer in Jerusalem.

In March, Rev Schmidt accepted a position in Karlsruhe, Germany as head of the Department of Education in the Protestant Oberkirchenrat.

Under the umbrella of the EKD, The Evangelical Jerusalem Foundation of which Rev Schmidt was the propst cares for the spiritual life at the Church of the Redeemer in the Old City of Jerusalem, The Kaiserin Auguste Victoria Foundation which is connected to the Lutheran World Federation campus on the Mount of Olives and The German Archeological Institute that runs programs in Jerusalem and in Amman.

The EKD and the ELCJHL have been in ecumenical fellowship since the foundation of the ELCJHL.

In attendance to bid Rev Schmidt, his wife and sons farewell were representatives from the Twelve Christian Churches of Jerusalem, The German Evangelical Lutheran School Talitha Kumi Principal Mattias Wolf, the Bishop Sani Ibrahim Azar and pastors of the ELCJHL, The Lutheran World Federation Jerusalem Program Representative Sieglinde Weinbrenner, other partner organizations, and OKR Rev Martin Puehn of EKD as well a host of guests and congregation members.

Brass for Peace, a cooperative non-profit brass orchestra between students from Germany and students from the Evangelical Lutheran Schools in the West Bank, performed during the reception that followed. Talitha Kumi choir led the congregation in worship.

Bless the Lord, O my soul, and all that is within me, bless his holy name! I want to end my years in Jerusalem with this hymn of praise! Anette, my wife and I, have received such a blessed time in this city and this country out of God’s hand!

Rev Rainer Stuhlmann from EKD will act as interim propst for one year. 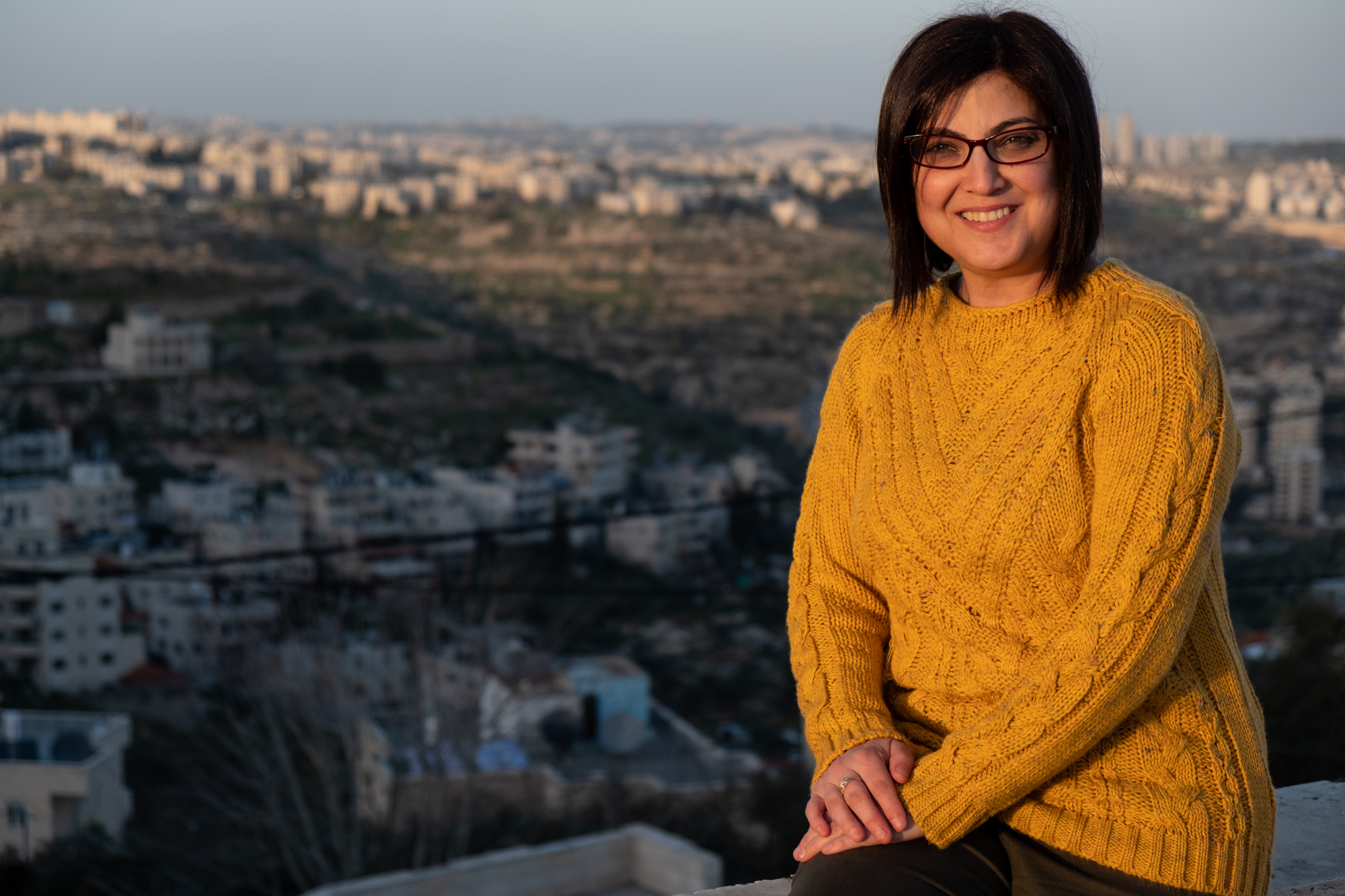 West Bank/New York – As the only female in the entire Middle East serving as a judge on the church Ecclesiastical Court which governs family matters among Christians, attorney Scarlet Bishara, a member of The Evangelical Lutheran Church in Jordan and the Holy Land (ELCJHL), will be a panelist at the United Nations’ Sixty-Third Commission on the Status of Women (CSW63) in New York, USA on 13 March.

The UN Bureau of the Commission will meet 11 – 22 March 2019, to reaffirm statements and review future strategies that support the Committee on the Elimination of All Forms of Discrimination against Women (CEDAW) document adopted by the UN General Assembly in 1979.

Bishara will speak during a side event, organized by the Lutheran World Federation (LWF) and the Church of Sweden, on the topic of Religious Actors Promoting Gender Equality Through Personal Status Laws in Palestine as a social protection system.

After the recognition and establishment of the Lutheran Ecclesiastical Court in 2014 by the Palestinian Authority, and inspired by the LWF Gender Justice policy, the ELCJHL established a groundbreaking amendment to its Personal Status laws in 2015.

One example of changes to the policy was an increase in the age that a girl can be allowed to marry from 14 years old to 18 years old.

Suad Younan, then head of the ELCJHL Women’s Committee and co-organizer of a 45-member seminar which launched the Arabic language Gender Policy in 2016, continues to encourage striving for equality in all religions and in the government.

“[It is important for the ELCJHL] to use its prophetic voice and effective tools to challenge ecclesiastical and socio-political fixtures,” Younan said in a 2016 LWF article.

The Personal Status Laws are cases such as divorce, inheritance, child custody, alimony, and other family matters, such as marriage age as mentioned above.

In Palestine, legal cases concerning the family are handled by the religious community.  Outside of the Islamic Sharia court, there are four Christian Ecclesiastical courts: the Catholic, the Anglican, the Orthodox the Lutheran courts. Each of these denominations has its own law.

Bishara says that because of the culture, when a case reaches the Ecclesiastical court it is usually the last resort for a family, especially for women.

Most of the time the women come to the courts after consulting the family, their fathers, and their pastors. Bishara says that often they continue to face suffering because usually, particularly in the case of the Catholic and some Orthodox churches, they are judged by unmarried men – priests.

“As an unmarried man, it is difficult for them to understand the situation of women,” Bishara said.

She explains that because of the culture, most of the men will place the blame on the wife first, saying, ‘she didn’t cook well, and made her husband angry. She didn’t raise the children well, or she didn’t satisfy her husband, therefore, he beat her.’ This is the cultural norm that we face in the Middle East.”

As a woman, Bishara says her role as a female judge is simple… “I hear them [the women].”

She also understands the consequences of not listening to women. In the past, many were turned away and told to ‘be patient’ or to give their husband another chance, which has led to women and children being badly hurt by domestic violence.

“I am trusted with their stories because I am a woman.”

Bishara says that her male colleagues, the two ELCJHL pastors and head of the court, ELCJHL Bishop Sani Ibrahim Azar, respect her insights, support her position as judge, and accept her decisions in cases, fully.  She stated that Bishop Azar, installed as bishop of the ELCJHL January 2018, has given his blessings to continue the progressive work of gender equality within the church.

“She understands how other women are feeling. She explains things that the men don’t understand,” said Bishop Azar.

“She represents us in a good way. We notice the positive outcomes of what we have today with her on the court as judge.”

Bishara wrote in her paper to the UN,  “the Lutheran Family Law of 2015 provides a sustainable framework for answering questions raised about how to rectify gender imbalances in the personal status laws in Palestine that are still promulgated by religious institutions of all faith backgrounds.”

Her message to the commission is that the Lutheran Family Law can serve as a theological- and biblical-inspired model that other religious communities can use to craft their own laws guided by gender equality, including the Islamic laws.

“The religious communities in Palestine are uniquely positioned to champion the rights of women in Palestine.”

During her discussion with the CSW63, Bishara is excited about the future possibilities of the ELCJHL’s gender policy. She hopes to eventually see one ecumenical law for all Christians that upholds justice for all woman.

Overall, she believes that because of the dual court systems in the Middle East, civil and religious, it is the religious community that will be the leaders in a just system for women.

“Change in the Arab world is in the hands of the faith leaders.”

Dina Nasser, a health advisor to the Augusta Victoria Hospital in East Jerusalem, coordinator for the Juzoor International Training Center in the West Bank, and an expert on hospital infection control is also a panelist with Bishara during the UN CSW63 side event. 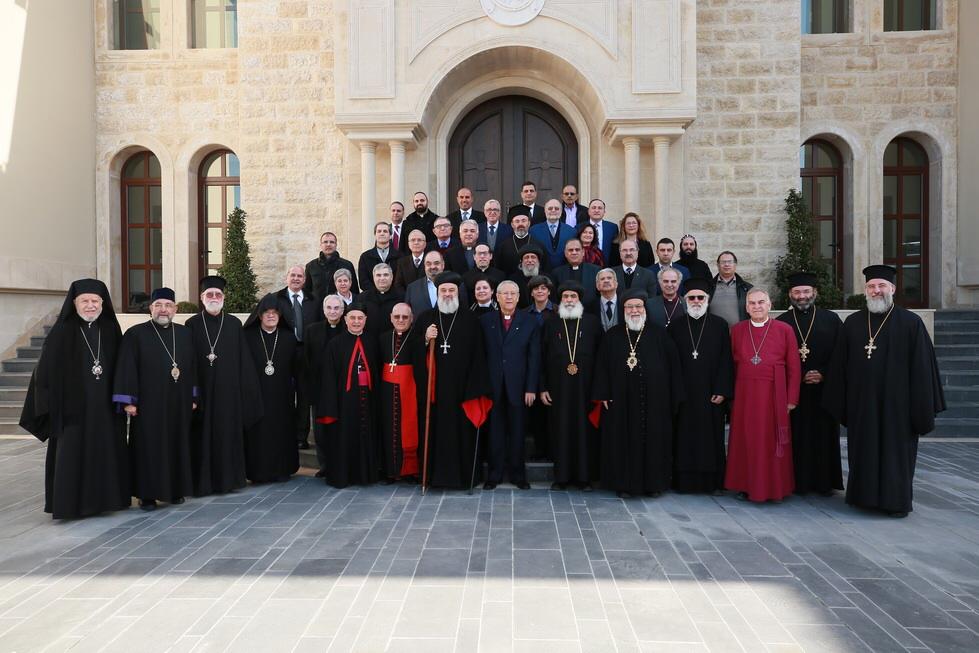 Bikfaya, Lebanon – On 22-23 January, The Executive Committee of the Middle East Council of Churches (MECC) held its third meeting at the Patriarchal See of the Syriac Orthodox Patriarchate of Antioch and All the East in Atchane. 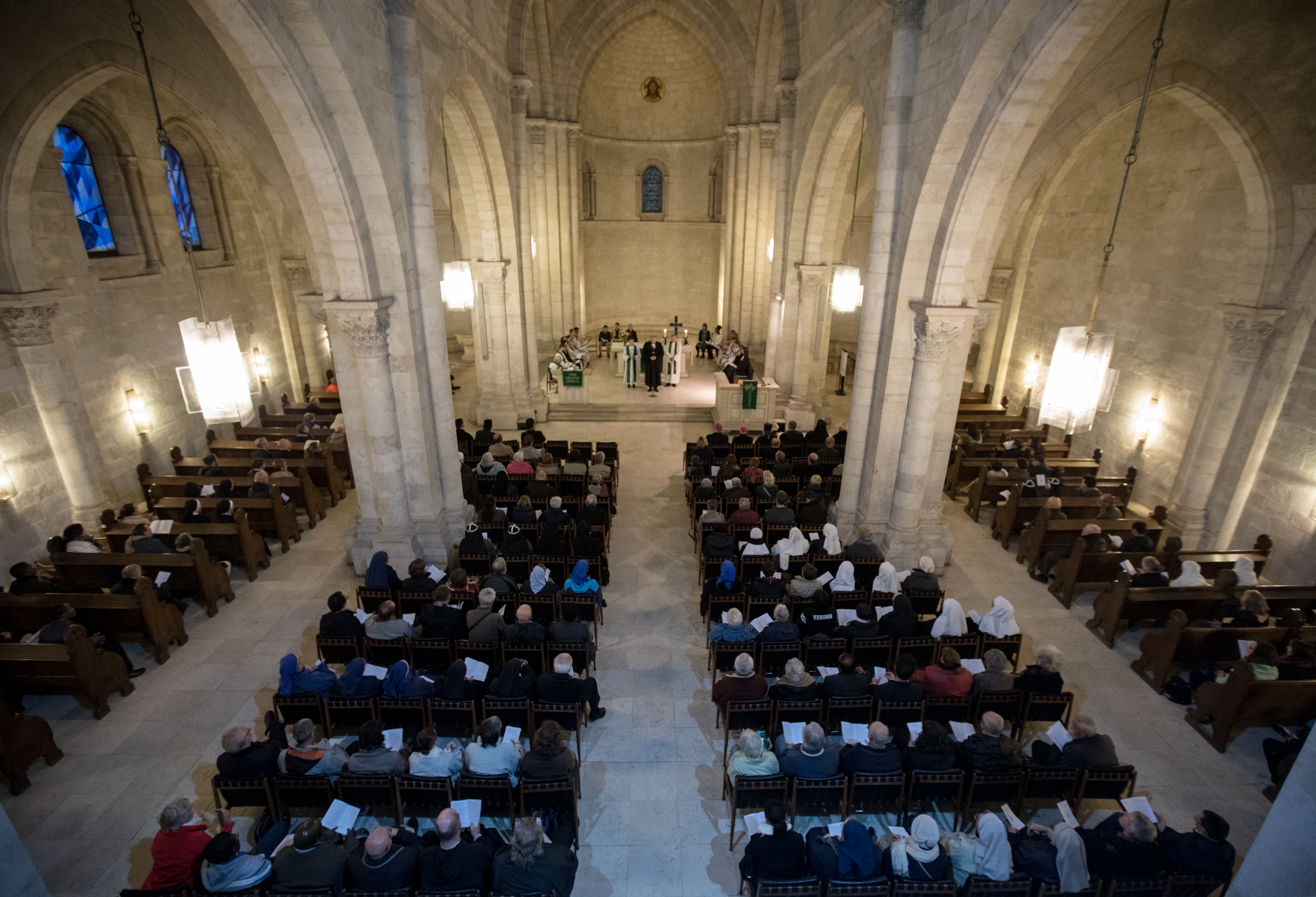 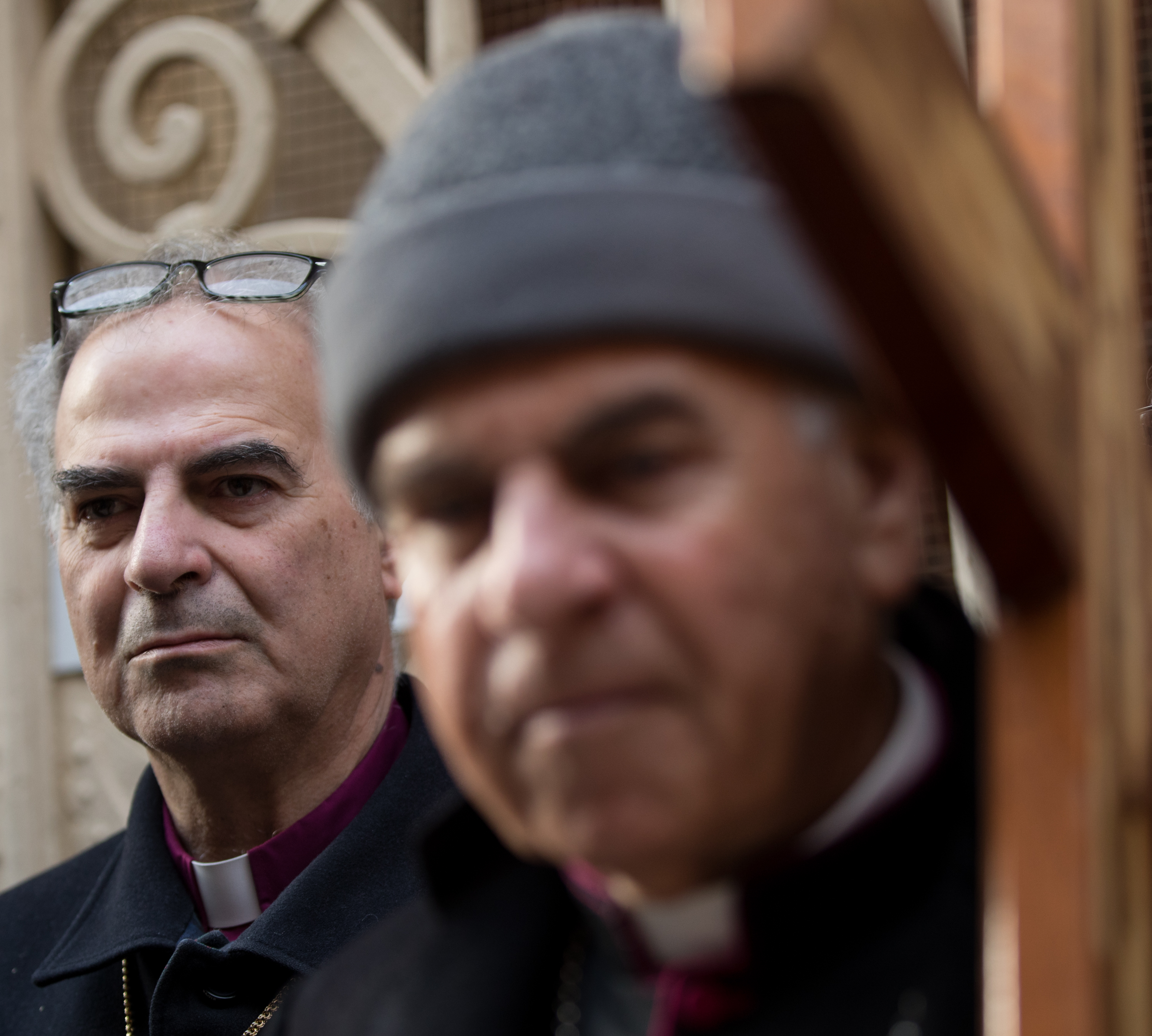 The Lutheran Church in BeitSahour, The Lutheran Church of Hope in Ramallah, the English, Arabic and German Jerusalem congregations and leaders from St. George’s Anglican Cathedral-Jerusalem كثدرائية القديس جورج في القدس carried the cross in remembrance of our Lord’s suffering this morning. 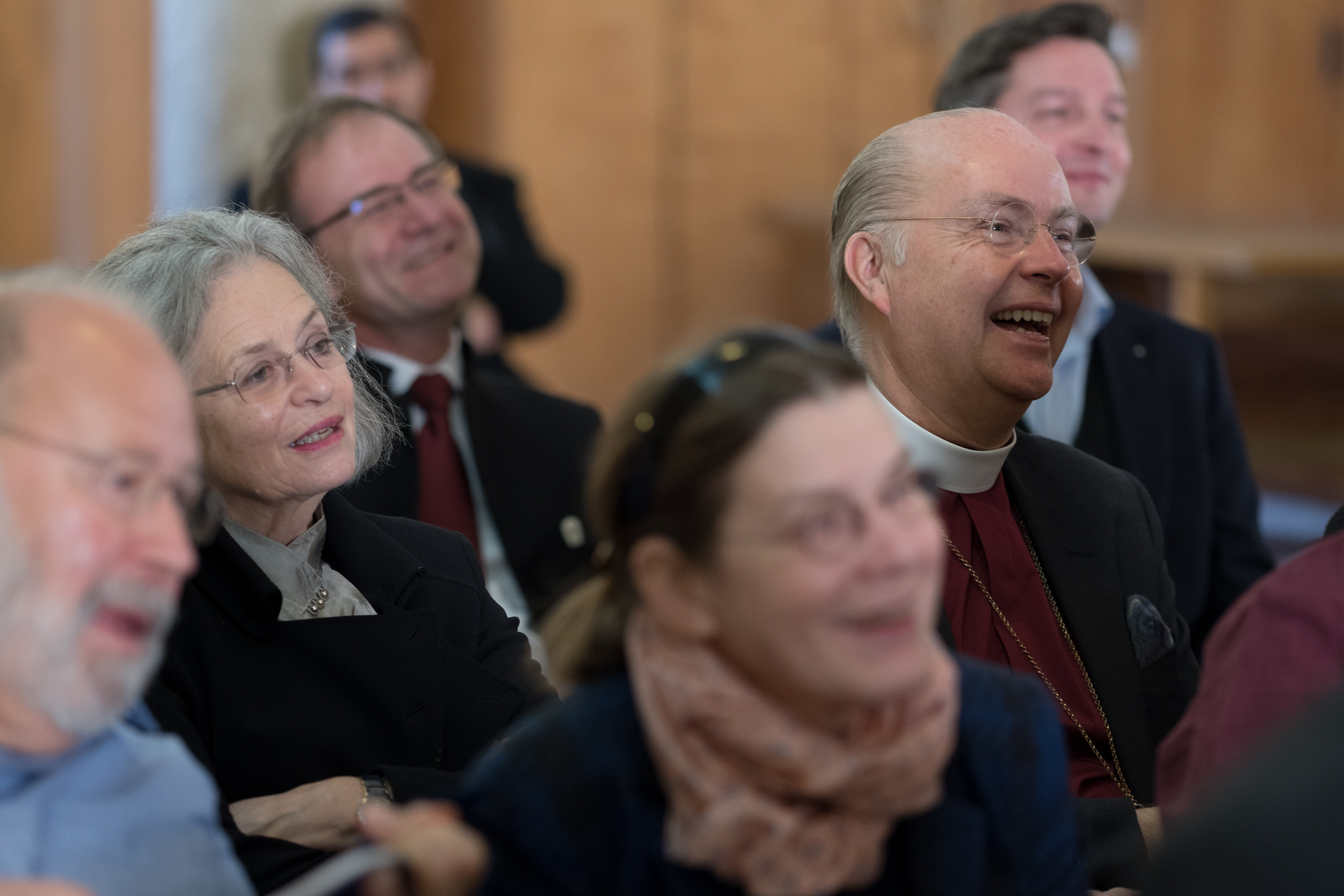 Jerusalem, 13 January 2018 – The day after the consecration of The Rev. Sani Ibrahim Azar as the fourth Palestinian Bishop of The Evangelical Lutheran Church in Jordan and the Holy Land (ELCJHL), Bishop Azar addressed the international partner churches in attendance for the installation. The international partners of the ELCJHL include organizations, churches and councils that have entered into mutual companionship and accompaniment for the betterment of both.

Representatives from all of the 29 ecumenical partners, member organizations and companion churches attended the first address to them from the newly consecrated, Bishop Azar.

Bishop Azar casually stood in front of the group gathered in the refectory hall of The Evangelical Lutheran Church of the Redeemer in the Old City without a podium and without notes and greeted the longtime friends and supporters of the Palestinian Lutheran church.

In a gentle and measured manner,  Bishop Azar thanked partners for decades of missional work in the region. Peppered with humor, Bishop Azar told the partners that he would implement a new strategic plan for the next five years that would include: Spiritual care for the people of the church, financial sustainability projects, Diakonia to the community, and efforts to continue gender justice.

“Our pastors and laypeople will go where the people are, we will not sit by idly in our churches waiting for the people to come to us,” Bishop Azar said.

During the question and answer session of the address, Bishop Susan Johnson of The Evangelical Lutheran Church in Canada and the President of The Coordination Committee for Cooperation between the ELCJHL and Overseas Partners (COCOP) asked Bishop Azar which of his many names (Sani Ibrahim “Barhoum” Charlie Azar) should the partners to use.

Photo Gallery of the Address 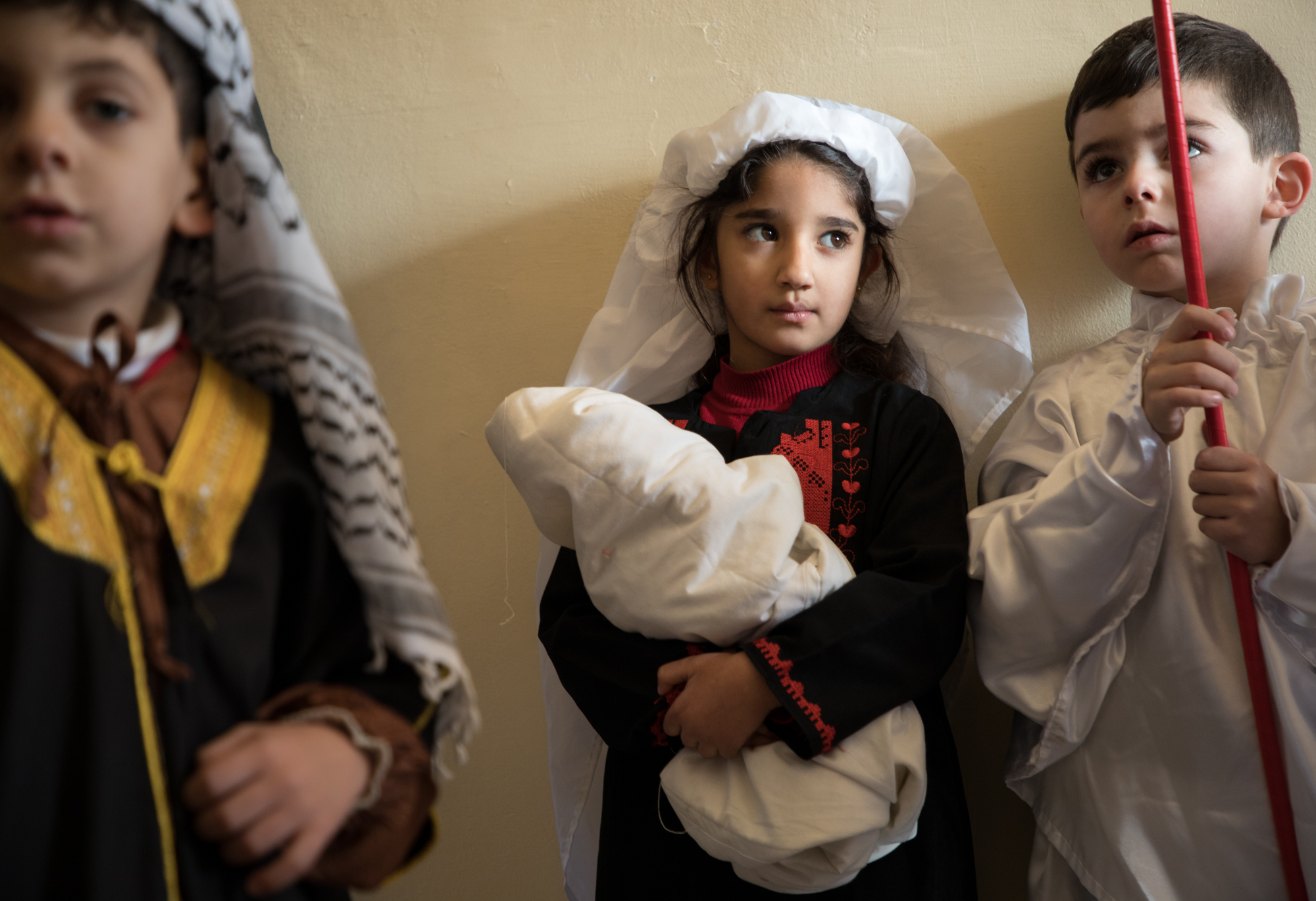 “Look, the virgin shall conceive and bear a son.”

So why celebrate Reformation 500 Day with so few Lutheran students?

2016 was marked by a historical event when the Bishop of the ELCJHL, The Rev. Dr. Munib A. Younan; Pope Francis, head of the Catholic Church; and The Rev. Martin Junge, the General Secretary of the Lutheran World Federation (LWF), co-presided in a Joint-Common Prayer in Commemoration of the Reformation in Lund, Sweden.

Bishop Younan and Pope Francis co-signed a statement that pledged to continue ecumenical cooperation throughout both churches.

Therefore, a school with the richness of religious diversity, such as the ELS, provides an obvious ecumenical and interfaith environment to learn about the Reformation.

“We are not here to convert but to emphasize the importance of knowing what Lutheran Reformation means,” (ELS) Director of Education and Educational Programs Dr. Charlie Haddad told the group of 8th-graders gathered in the Dar al-Kalima Evangelical Lutheran School gymnasium.

“This event distinguishes our schools from the others.”

For the Muslim, the Orthodox Christian, and the Evangelical Christian, the Reformation not only represents a theological occasion, but it represents a social change, Dr. Haddad said to the students and teachers.

“The reformation continues as we reconcile with the Catholic church. All churches should talk about reconciliation within each society,” Bishop Younan said.

Bishop Younan said that to disagree is not a license for intolerance and that if we are truly a reforming church, then we are tolerant of other religions, even when we disagree. He urged the students to keep away from religious prejudice and intolerance.

Dr. Haddad offered a cash reward to the top essays from students themed, What should be reformed in my community today?